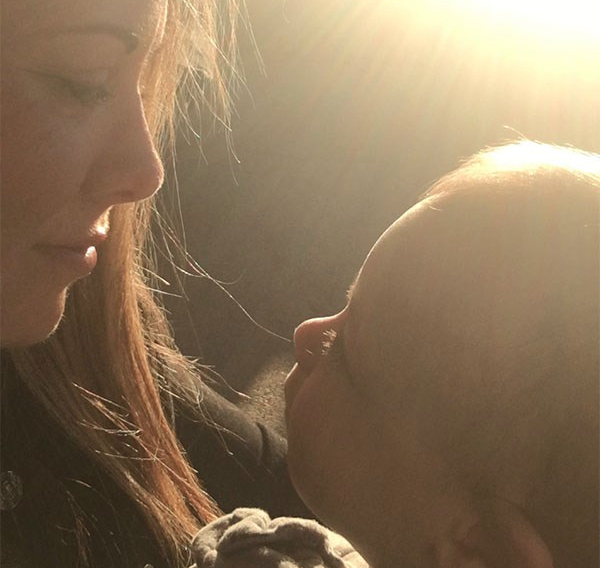 What breastfeeding taught me about imperfection.

In Canada, we celebrate World Breastfeeding Week from October 1st to 7th. This year, let’s acknowledge that even though breastfeeding offers benefits, it can also be hard. Let’s talk about the stigma that surrounds formula feeding and the guilt that comes with “imperfection.” And let’s support mothers – without judgment – for the choices they make for their families.

During my pregnancy I poured over everything I could find online about parenting.  As I googled from my bed at 2am, the bright light from my iPhone illuminated my growing belly.  I had never been around babies, or even young children for that matter. The only thing that tempered the sudden stabs of fear (not baby kicks!) in my gut was reading. I was reading story after story, in forum after forum, trying to prepare myself for my new future as a mother. My public relations work has trained me to think of every negative outcome, and to be prepared to deal with every possibility.

I read everything I could get my hands on about breastfeeding.  And trust me, there is a LOT of information out there about breastfeeding. The positive outcomes are well documented. Breast milk contains antibodies that help babies fight off viruses and bacteria, lower risks for asthma or allergies, and exclusively breastfed babies also have fewer ear infections, respiratory illnesses, and bouts of diarrhea.

Breast is best. The message was everywhere. I heard it repeatedly – from the nurses in the hospital, from my well-meaning aunt, from other moms. The forums I followed were filled with stories about latching, nipple creams, nipple shields, and some seriously stomach-turning chatter about precisely WHY one would need that highly recommended nipple cream. I quickly learned that breastfeeding was hard for some people, and thought it probably might be challenging for me. At the time, I didn’t yet know how hard it would be.

Flash forward to a little over two weeks after I returned home from an intense – is there any other kind? – birth that ended in an unexpected C-section. My little guy had lost a fair amount of weight while in hospital and wasn’t regaining it as quickly as our public health nurse would’ve liked.

Breastfeeding was a struggle. I had shown my nipples to more people in the few short weeks after my son’s birth than I had in my entire prior life. My body didn’t feel like mine any more. I felt guilty when my partner brought our son to me at 1am… 2am… 3am… apologizing each time while saying, “I think he is hungry.” Looking back, the failure I felt was not my fault. But at the time, I was suffocating in feelings of guilt that poured from my pores like the night sweats that soaked my mattress in the days following birth.

It seemingly takes so little to keep someone alive. Food. Water. Shelter.  And I felt like I was failing to provide the basic necessities of life. Hot tears streamed out of my red, swollen and tired eyes. I felt guilty, like I knew he wasn’t getting enough milk.

I finally pushed my guilt aside just enough to suggest the bottle of formula the hospital had sent home with us, just in case. My question hung in the air, heavy and thick, before my partner filled the silence with another question that felt more like a statement.

“I thought we decided we weren’t going to do formula?”

It was a loaded question, but asked innocuously.  I should reframe that. It was loaded for ME. In fact, every suggestion directed at me in the postpartum period felt loaded, like some sort of secret code for my inexperience with parenting.  If my mother suggested putting a sweater on my week-old son, I’d assume she was calling me a bad mother for letting my child freeze.

Determined, I pumped breast milk nearly every 3 hours for weeks. I set my alarm so I could continue pumping through the night, just so my son would have a full bottle at bed time – which was when I barely had any milk. I took supplements that made me smell like rancid maple syrup. And I cried. My tears of frustration could fill up more bottles than the milk I was desperately trying to pump.

But sometime between 4 and 6 months, it got easier. Maybe it was because my son was eating solid food and I didn’t feel like he was just relying on my ability to produce milk. Perhaps it was because I was getting more rest and coping better with the many ways a baby changed my life. Or maybe it was the formula I ended up mixing with his bed time bottle of breast milk.

What I know for sure is that something switched. It happened when I realized that, when it comes to babies, fed is best.  Being a mom who isn’t racked with guilt and anxiety is probably just as important as exclusively breastfeeding. Letting go of some of the guilt and expectations I had for myself had actually made breastfeeding both easier and enjoyable for both of us.

I was breastfeeding my son in one of those wearable carriers, while in the check-out line at Costco. I noticed another mom sitting at a table, desperately trying to feed her new baby. I could see familiar hot tears collecting in her eyes, and feel the vibes of frustration as her baby fussed and squirmed under the cover.

Our eyes met, and I smiled encouragingly at her. She smiled back, a tired smile with a mix of desperation… a new mom smile. As I pushed my cart away, I quietly offered a small ray of hope: “Breastfeeding is hard. But it gets easier. And if it doesn’t, you always have other options.”

In Canada, we celebrate World Breastfeeding Week from October 1st to 7th. This year, let’s acknowledge that even though breastfeeding offers benefits, it can also be hard. Let’s talk about the stigma that surrounds formula feeding and the guilt that comes with “imperfection.” And let’s support mothers – without judgment – for the choices they make for their families.

Amy Tuckett-McGimpsey is the Communications Specialist for Women’s Health Clinic.

Women's Health Clinic is an inclusive, feminist community health clinic. We are a non-profit, charitable organization that provides a range of accessible health and mental health services, health education, and advocacy. View all posts by Women's Health Clinic

WHAT IS THE GLOBE & FEMINIST

The Globe & Feminist is an initiative by Women’s Health Clinic (WHC) to provide quality health information and feminist perspectives. WHC is a community health centre located in Winnipeg, Manitoba.

get the globe & feminist delivered to your inbox

Sign Up Now
For Email Newsletters you can trust.

Consent is conversation, not condoms.

Addicted to food? Here’s what you need to know.

Blow Your Own Mind: 10 Tips for Solo Sex

Confessions of an Abortion Counsellor