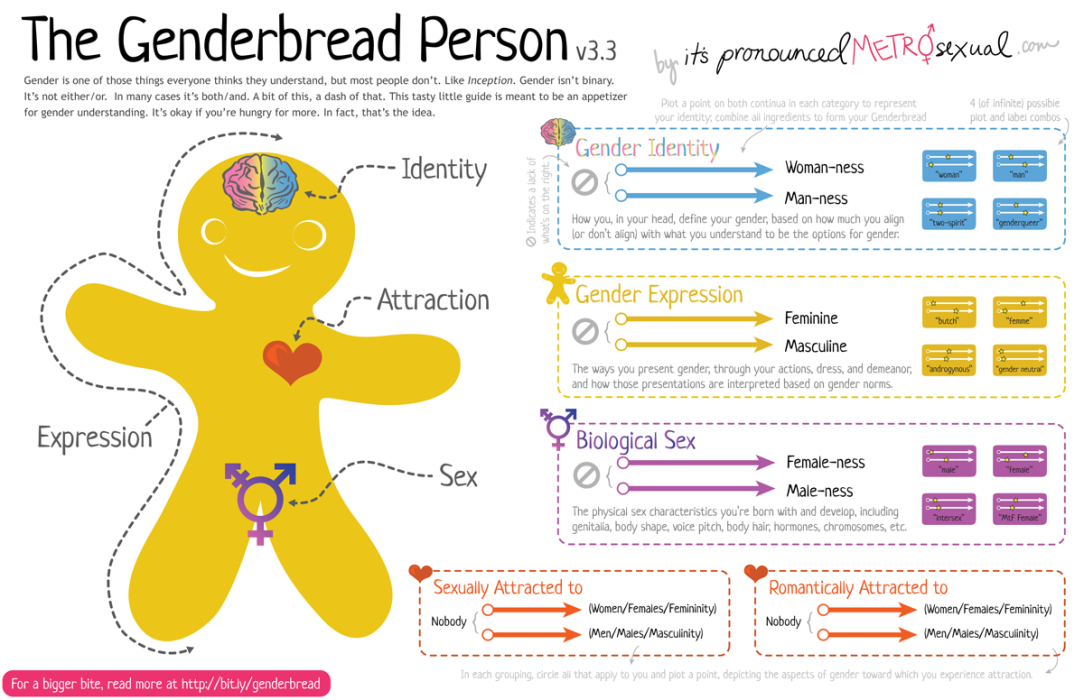 Sexual and gender identity – what does it all mean?

The ideas and language of sexual identity and gender have evolved over time. Today, as technology offers new ways to share information and ideas, the landscape is changing more rapidly than ever.

While the terms sex and gender are often interchanged, there is a definite distinction; sex is defined by biology while gender is defined by society.

In other words, the sex of a female is defined by the presence of two ovaries and secondary female characteristics – breast development, hair growth patterns, and body fat distribution – while the gender of that same person is defined by the role society expects of her because of her sex.

Most people are cisgender, meaning their sex matches their gender. Those who are not cisgender would likely identify as intersex or trans (transgender). http://www.isna.org/faq/transgender The biology of an Intersex person does not fully align with either female or male or has biological aspects of both.

A trans person has an internal identity that is in conflict with either their sex or their gender. Trans is an umbrella term and includes transsexual, transgender, and may include a whole host of terms like genderqueer that indicate people who do not fully define with the confines of the terms “female” or “male”, or those who do not believe that humans should be divided into two mutually exclusive sexes or genders.

Transsexual refers to someone whose physical body does not match their sexual identity – they may feel that their body has the “wrong” parts.

Transgender refers to someone who is naturally attracted to societal roles that do not match their biological sex.  This is where things get a little more complicated as anyone working to break down rigid culturally-defined gender roles could be considered transgender (including feminists and lesbians).  However, this term is generally used by those who have a very strong sense that their gender does not match their gender identity.

It must also be said that a growing segment of the population is rejecting their culturally assigned gender roles without defining as cisgender, trans or intersex. New terms and definitions are being created on an ongoing basis as these people sort through the issue. Some current and emerging terms include demi-girl, demi-boy, gender queer, etc.

Note: Transgender is not a verb, so please do not use the past tense transgendered.
Local resources:  http://winnipegtransgendergroup.com/faq/

If you are straight, you are attracted to people who are of the other sex/gender. Assuming, of course, that there are only two sexes/genders – see how complicated it gets?

If you are a lesbian, you identify as a female and are attracted to other females.

If you are a gay male, you identify as a male and are attracted to other males.

If you are bisexual, you are attracted to both sexes/genders.  The term Bi-sexual does imply that there are only two sexes or genders.

If you are pansexual, you are not limiting your sexual preference to sex, gender, or sexual or gender identity.

If you are asexual you are not sexually attracted to anyone. This isn’t the same as choosing to abstain from sex.

The Genderbread Person is an excellent tool for explaining the concepts of sex, gender and sexual orientation. Click below to download the pdf.

“Our elders tell us of people who were gifted among all beings because they carried two spirits, that of the male and the female.” http://www.dancingtoeaglespiritsociety.org/twospirit.php

This is an Aboriginal term that has a slightly complicated meaning.  Traditionally, First Nation groups had a different sense of sex, gender and sexual orientation than we understand now and each First Nations group had their own variations and understanding of sex and gender.  Some Nations had as many as 7 terms of different genders, others had three or four.

Two-Spirit people were traditionally very highly respected and were often healers or shamans.  Some had other specific roles in the community. Colonization enforced the ideas of two genders, two sexes and strict gender roles and sexual permission.  Over the past twenty to thirty years, members of the First Nations communities of this region began to take back their power and rights and coined the term “two-spirit”.  Currently First Nations people who identify as gay, lesbian or trans may identify as two-spirit.  Not all who fit into the broad definition have taken on this identity, though, for many reasons.

Note: two-spirit is not a verb and should not be shifted to the past tense two-spirited.  Many people do use this form, but in some dialects of Manitoba it refers to someone who is possessed by spirits (ghosts) so while some groups have taken on the term two-spirited, others shy away from it.

The ideas and language of sexual identity and gender have evolved over time. Today, as technology offers new ways to share information and ideas, the landscape is changing more rapidly than ever. While it can sometimes be challenging to keep up, our commitment to inclusion and social justice helps guides the way.

At WHC, our Health Education Department offers a regular series of HED Talks, including films and discussions for the professional development of our staff and volunteers. With Winnipeg’s annual celebration of PRIDE just around the corner, it’s timely to share.

Women's Health Clinic is an inclusive, feminist community health clinic. We are a non-profit, charitable organization that provides a range of accessible health and mental health services, health education, and advocacy. View all posts by Women's Health Clinic

WHAT IS THE GLOBE & FEMINIST

The Globe & Feminist is an initiative by Women’s Health Clinic (WHC) to provide quality health information and feminist perspectives. WHC is a community health centre located in Winnipeg, Manitoba.

get the globe & feminist delivered to your inbox

Sign Up Now
For Email Newsletters you can trust.

Consent is conversation, not condoms.

Addicted to food? Here’s what you need to know.

Blow Your Own Mind: 10 Tips for Solo Sex

Confessions of an Abortion Counsellor